Participation in internet policymaking in Latin America and Caribbean region can be articulated from many different routes and networks. This was the goal of participating in LACNIC27, an event which happened in the triple frontier of Brazil, Paraguay and Argentina city of Foz de Iguazu, in the end of may.

LACNIC is the Latin American and Caribbean Internet Addresses Registry, one of the five Regional Internet Registries (RIRs) that exist worldwide. It has 2 annual meetings, one in the 1st semester of the year and another in the 2nd semester of the year organized in conjunction with LACNOG, the community of network operators of LAC region.

The meeting in Foz was the 1st LACNIC meeting of 2017, the 27th meeting. During the event a few NCUC members were present and we participated in sessions (both as audience and speaker/panelist), organized an activity of outreach in an university and participated and supported communities to increase awareness of policymaking processes.

– LACTLD track
The LAC ccTLDs Association debates matters related to internet policy for ccTLDs in the region. These sessions are organized in a track parallel to other sessions in LACNIC. Me, as NCUC LAC representative, was asked to facilitate an interactive session with break-out groups on the theme human rights and internet policymaking. The group investigated the work of the CCWP (Cross Community Working Party) on ICANN’s Corporate and Social Responsibility to Respect Human Rights, starting from the infographic on policies and human rights.

Check out the infographic.

– Policy forum
The Policy forum at LACNIC is where members of the RIR comment on policy proposals for the regions and exercise their vote on important matters. As observers, NCUC members could learn more about the policymaking process at the RIR. Elections for several positions in the organization also happened during this meeting and observing the proposals of the newly elected candidates can also help understand future directions in internet policies in the region.

– IT Women working session
A community to increase participation of women and all genders in LACNIC was established called IT Women. The community has a mailing list with a low level of traffic. This changed in 2017 when a group of LACNIC and ICANN community members (including NCUC) proposed monthly webinars and working sessions at the onsite meetings for the community to integrate more. The meetings of #ITWomenLAC have since made many LACNIC get many new members and motivated women to run for elections for several positions in LACNIC. Among them, NCUC member Paola Perez became the first woman to moderate LACNIC Policy Forum. Other internet governance community members and participants in the community include Mariel Aranda (NCUC), Beatriz Rodriguez (NCUC), Kimberly Anastacio (NCUC), Lilian Ivete Deluque Bruges (SSIG 2016), Lia Solis (ICANN Fellow) and many others.

Get to know the community IT Women.

– Panel diversity and inclusion
This session was a debate between several LACNIC community collaborators on projects to help increase diverse participation on policymaking processes. Yacine Khelladi (Web Foundation), Raquel Gatto (ISOC), Carmen Denis Polanco (University of Yucatan) and me, as NCUC LAC representative, were asked describe initiatives and ideas on the topic. The session NCUC organized on internet policymaking at Internet Freedom Festival was one of the topics, as well as the work ongoing on CCWG WS2 Diversity which can be observed.

LACNIC news report about the panel

A group of NCUC members was invited by UNILA (Universidade Federal da Integração Latino-Americana) to an informal meeting on internet policymaking processes and diversity in participation. Mariel Aranda (Paraguay), Beatriz Rodriguez (Uruguay), Carlos Vera (Ecuador) me and collaborators Shernon Osepa (ISOC) talked with professor Jorgellina Tallei about the topic. The event was in UNILA’s online learning department classroom and the university invited NCUC back for other talks. 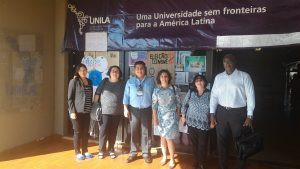 LACNIC meetings are important events for the ICANN LAC community to be aware of new policies and debates on DNS (domain name system) which affect the region. LACNIC may provide partial financial support to participate in the meetings which can help those who are starting to know the community. My participation was possible due to the support of LACNIC and ICANN.

Our next steps will be to continue investigating internet policy developments which affect LAC region and increase participation of all countries, regions and genders in these processes.