With a workshop, a pre-event, a village booth, and the presence of dozens of active members, NCUC figured eminently in the 12th Internet Governance Forum, which took place from 18 to 21 December 2017, in Geneva Switzerland. 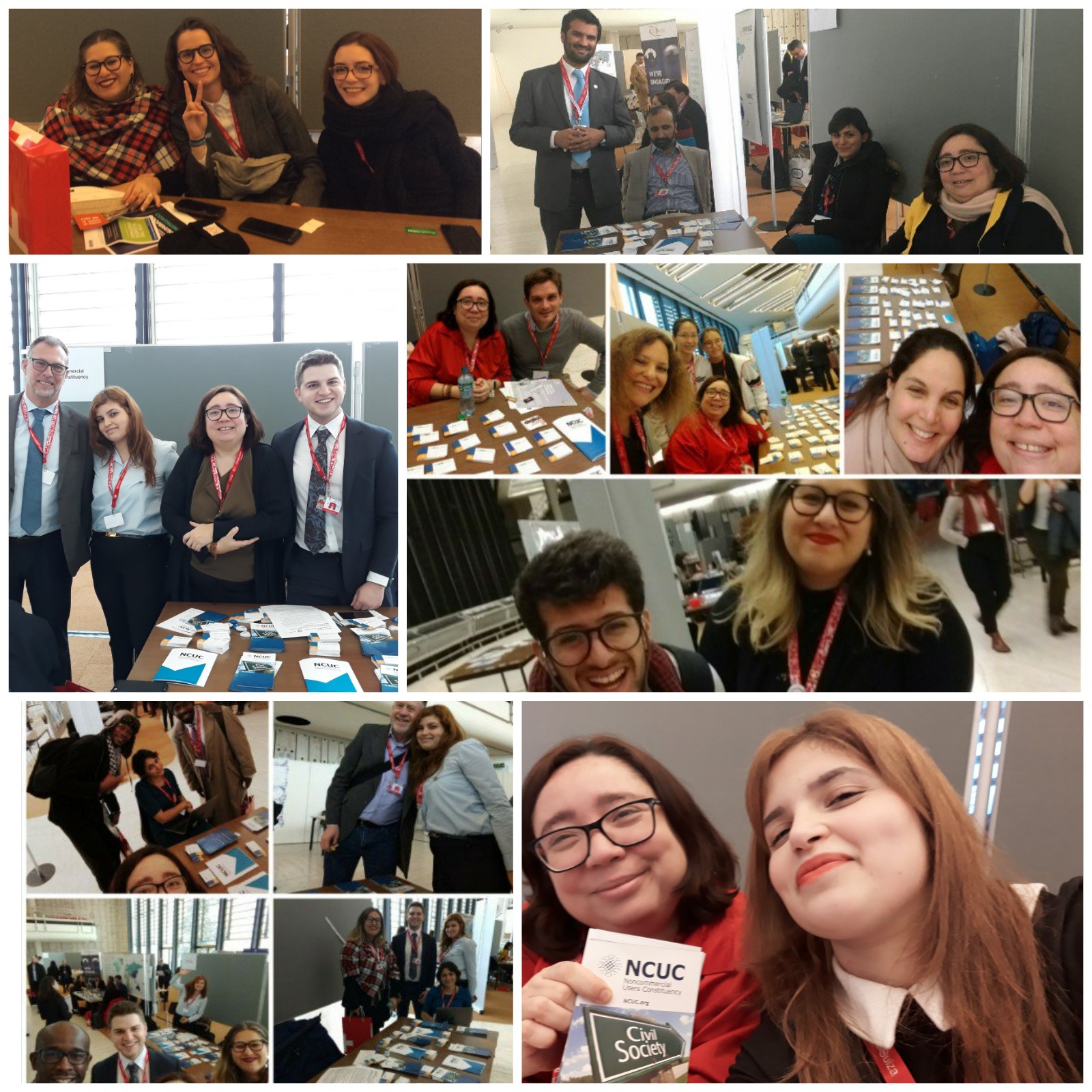 The event’s overall theme was “Shape your digital future”and in terms of numbers, 2019 was the number of onsite attendees from 142 countries representing all stakeholder groups and regions. The 12th edition of the Internet Governance Forum featured a total of 260 sessions with a wide spectrum of themes ranging from access, inclusion diversity, critical internet resources, cybersecurity, digital economy, digital work, trade, sustainable development, gender, youth, human rights online, multistakeholder model, and emerging issues such as artificial intelligence and fake news etc. 32 remote hubs were organized around the world, representing 1661 stakeholders a data that reflects the high level of remote participation that the 12th IGF witnessed in 2017.

For NCUC, the IGF journey started on December 17th2017 with a joint civil society meeting organized by organizations that are part of the Internet Governance Civil Society Coordination Group (CSCG), comprised by Best Bits, the Association for Progressive Communications, Internet Governance Caucus, Just Net Coalition, and the Non-Commercial Stakeholders Group of ICANN. Apart from the members of the CSCG the event counted with the support of Diplo Foundation and the Geneva Internet Project.

Another event that took place on the week of the IGF was the 12th Annual Symposium of the Global Internet Governance Academic Network (GigaNet), a full day pre-event featuring innovative research about a wide range of issues from private regulation of the Internet, trade and the Internet to privacy and economic value of data. The meeting, who took place during IGF’s day zero, also featured a session to voice regional issues, a policy session about IG and media, IG and IPR, encryption and social justice. Whereas the pre-event’s final session was a mapping of the civil society’s strategy at IGF.

During the pre-event, the participants delved into the work of NCUC through a presentation by Farzaneh Badii. Overall, the meeting provided valuable academic insights about the Internet Governance institutions, practices and trends.

During the IGF, NCUC organized a workshop titled “Content Regulation and Private Ordering at Internet Governance Institutions”. Under the moderation of the NCSG Chair Farzaneh Badii, the session addressed how to avoid the potential involvement of ICANN in content regulation due to the impacts involvement could have on end-users rights such as freedom of speech.

One of the speakers, Annemarie Bridy, shed the light on the potential drive towards content control after the implementation of the Public Interest Commitment which requires that every new gTLD registry operator to pass along to registrars a contractual provision with registrants prohibiting piracy and counterfeiting and providing consequences for breach including the suspension of domain names. Another important development was highlighted with respect to migration and content regulation regarding the Domain Name System is the 2016 trusted notifier arrangements between Donuts and the Motion Picture Association of America which allowed Donuts as the registry operator of hundreds of new gTLDs to bypass registrars and send Domain Names at the registry level if a registrar refuses to take action in response to the MPAA complaint.

During the session, NCUC members Milton Mueller and Tatiana Tropina presented their views under the Constituency’s perspective. Milton Mueller highlighted the exerted pressure on the intermediaries to take on responsibility of enforcement of content regulations and stressed the importance of working on this agenda on ICANN in order to prevent any ICANN’s actions from inciding in content regulation and any possible consequence regarding end-users freedom of expression this would entail. Dr Tatiana Tropina addressed the dangers contained in the blurring lines between the notion of DNS and content abuse which may lead to content regulation. She stressed the need of a technical narrow definition of abuse in this scenario.

Becky Burr, ICANN Board member and one of the panelists, reaffirmed ICANN’s commitment to refrain from regulating content. It is also important to note the participation of Tim Smith, General Manager, Canadian International Pharmacy Association, who delved on the subject from the perspective of trusted notifiers and also Brian Cute, from the Public Interest Registry, who brought in the perspective of the registry operators.

Tim Smith emphasized on the importance of healthy practices when dealing with content regulation and specified that limiting what could be a trusted domain name to a small group of very restricted criteria is a form of content regulation.He explained that dot pharmacy’s registering criteria is limiting pharmaceutical domain instead of providing access to a wide range of products regardless of national borders.

Brian Cute reaffirmed the Public Interest Registry’s belief that registry operators should not be arbitrators of content on the Internet. He explained that their takedown policy articulates about the technical abuse of DNS and that due process and the rule of law are at the heart of their takedown policy with two exceptions relating to child pornography and hate speech with a specific call to violence for the US residents under the US law. Brian Cute stressed on finding the right approaches to systemic copyright violations and the increasing government pressure to take down content.

The session featured an interactive discussion reflecting the different perspectives of the interested parties – notably registry operators, registrars, NCUC members and the participants. The discussion touched upon issues such as the need of ensuring due process when addressing DNS abuse, investigating the application of Manila Principles on intermediary liability, and copyright policy concerns.

Apart from the workshop, the members’ commitment was also reflected by their remarkable presence either as organizers or speakers within the following workshops directly related to NCUC’s work The Future of Internet Identifiers: How the DNS will Function in a Smart Cyberspace? (WS48), Multistakeholder governance of the Domain Name System, lessons learned for other IG issues (WS76), the second meeting of all schools of Internet Governance and some other sessions not directly related to NCUC’ s work or ICANN’s remit. In this regard, it is worth mentioning that aside from IGF 2017 transcripts and videos, very resourceful daily reports were provided by the Geneva Internet Platform Digital Watch observatory.

In parallel with the sessions, the NCUC booth was always a great venue to visit in the IGF village as it was furnished with copies of leaflets and the NCUC brochures in several languages. No matter what time of day, morning or afternoon, day 1 or day 4 you visited, our volunteer members were always gathered around the booth to welcome the visitors and provide them with insightful conversations on the importance of advocating the non-commercial claims within ICANN and also the Constituency’s work .

On a more personal note, alongside with organizing my own workshop titled Achieving the 2030 Sustainable Development Agenda in the digital future:Where do youth stand?, being one of the members who received the NCUC’s support for attending the IGF allowed me rewarding experiences such as being part of the booth volunteer staff, interacting with numerous IGF participants and informing them about how we work to make the civil society’s voice heard within the DNS ecosystem and to transmit my passion about advocating non-commercial users rights as part of the NCUC community .

My travel to IGF 2017 was possible thanks to the support of NCUC. Thank you, NCUC!